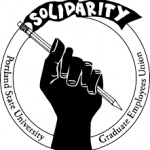 Like a newborn foal, the Graduate Employees Union at Portland State University has landed on its feet bucking, negotiating its first contract with no hesitation. During the past year GEU has dedicated its efforts towards the non-economic issues facing grad employees here, such as appointment notifications, workload, and tuition remission.

In the coming year GEU will take its first bite into the economic issues regarding minimum stipends, cost of living adjustments and healthcare. An initially recalcitrant administration has placed significant hurdles along the way, but the bargaining is confident that a valuable contract is already in the works.

No comments yet. You should be kind and add one!