Oregon President José Padín testified Tuesday February 17th in front of the Senate Education Committee in Salem, strongly supporting Senate Bill 113 which mandates reporting of employee classifications and average salaries in Oregon public universities and community colleges. Padín told the senators that “we believe the Oregon public has a right to know how much of their tax dollar, and Oregon students and families have a right to know how much of their tuition dollar, is spent on education–and how much is being spent on growing ranks of administrators with extraordinary and rapidly-growing salaries.” 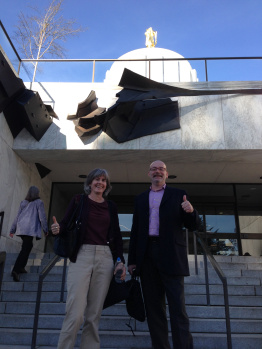 Butler and Padín after the hearing

Read the rest of the testimony here.

This bill would be a small step towards transparency and accountability. A university administrator from southern Oregon also testified, expressing concerns about the way the bill is written. Stay tuned for more info!

AAUP-Oregon will continue to weigh in on legislative issues which matter to Oregon faculty as we build a movement, together with our allies, for quality, affordable higher education in our state.