Congratulations to the newly elected officers of AAUP Oregon!

Officers met for the first time on Friday, April 5, 2013 at Portland State University to begin charting the future of the state conference. The Executive Council will next meet at OSU on Saturday, June 1, 2013.  Additional location and time information coming soon! 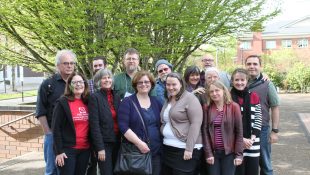 Seeking Nominations for the AAUP-Oregon Execu...

No comments yet. You should be kind and add one!