Epochal Crossroads and the Value(s) of Higher Education: A Critical Reflection 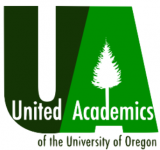 The divisive and toxic national political climate has deeply impacted our campus throughout this academic year, altering the way in which words sound and acts mean, changing the way in which we all see each other and the university as an institution. Already, over the past decade, the historical crossroads for our university was an increasingly fraught choice between a previously dignified public university or a largely privatized corporation. The scandalous withdrawal of state revenues away from Higher Education in Oregon and elsewhere in the country dictated a donor-driven, student-as-customer-and-future-alumni ethos for which the narrative of the campus was becoming increasingly more devoted to the show-business of college sports next to the campus as a profitable space for networking, offering a set of business-oriented skills (accounting, letter writing, marketing), and then – as an afterthought – showcasing some cool scientific discoveries resulting from regularly underfunded projects.

The narrative of the liberal arts college, where students were not future clerks or businessmen and women “in training”, but young people experiencing a radical intellectual transformation through deep daily exposure to small seminars in philosophy, political science, quantum physics, religion, history, medieval verse, anthropology, a different language and its culture, algebra, or music and dance was rapidly evaporating at the beginning of the decade. The impact of a deep recession, which has supposedly made families become more utilitarian around college education, is one of the arguments constantly used to justify closing down “expensive” and “useless” seminar classes, while opening large remodeled buildings to host five-hundred bodies in search of an Excel sheet or a Prezi show. The incapacity of donors and administrators to see and protect the worth of the liberal arts model, with the arts and humanities at its core, has meant that we are confronting the naked neoliberal model of privatized knowledge production, the celebration of patent offices and pricey stadiums on campus while libraries and humanist programs are culled.

We now have a deeply indebted student body paying for online or massive classrooms where knowledge is dictated rather than discussed, a dependence on increasingly wealthier out-of-state students, and on the largesse of donors who get to pick their projects and orient the ideological and scientific impulse of the campus. Add to this neoliberal private-oriented trajectory the confounded and obscure project of a protectionist intolerant nationalism based on narcissism and provincial ignorance and you can easily imagine a society of selfish mandarins and dehumanized peons, of 1 percent executive overlords ruling over a mass population of illiterate, pious but uneducated, ideologically-controlled citizens. We can call that new crossroads not neoliberalism, but neofeudalism. Capitalism returning to its feudal origins. The rule of families, cliques, celebs, influence, and money over the enlightened dream of equality, freedom, and justice for all on which this republic, this state, and this university were founded.

The value of knowledge at these two overlapping crossroads, however, should not be measured by a degree or by a specific skill-set, it cannot be just a chance to rub shoulders with so-and-so or an internship in such-and-such. Knowledge in a public university has a truly public vocation: we should advocate with our donors, with our state, for a free, no cost, no frills college experience where knowledge itself would be the adventure, the project, one that should have a much less commoditized, more immediately useless nature, both social, and deeply personal. It should be knowledge for the emancipation of the individual and of all of humanity and not knowledge to sell, lend, and forever indenture our fellow humans while destroying our only planet. Those are the crossroads on which we labor, those are our impossible choices.