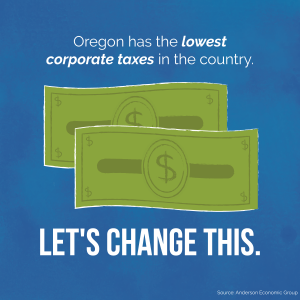 A Better Oregon is the campaign to end chronic underfunding of education, healthcare and senior services through a modest increase in the minimum tax for large corporations.  The AAUP-Oregon Executive Committee made the decision to support the initiative petition because our members are tired of the continued crisis in state funding.  If we make the pie bigger, we can increase funding for higher education.

Many groups have been in conversation for a long time about the need for reinvestment in education and social services, and after testing many possible ideas to raise revenue, progressive groups went ahead with Initiative Petition 28, which will raise $5 billion in new revenue.  IP 28 raises the minimum tax on corporations that have over $25 million in sales in Oregon. Any sales over the $25 million would be taxed at 2.5%.

The measure will allow Oregon to hire back laid off teachers, bring class size down, help seniors living in poverty and make health care to more Oregonians.  To help collect signatures or help the campaign in other ways, you can volunteer at http://abetteroregon.org/volunteer/.

The campaign is planning a winter kickoff event on January 23rd, in Portland, at 10 am, location to be announced.