PSU-AAUP and AAUP-Oregon welcomed colleagues from across the country to Portland State in mid-July. AAUP’s Summer Institute was a big success, with record-setting enrollment, a wide variety of course offerings, and increased opportunities for discussion and the exchange of information with peers.

Summer Institute workshops ran the gamut from grievance handling to bargaining to non-violent direct action and included everything in between. Many workshops focused on organizing and running campaigns. Racial justice discussions and workshops were a key part of the curriculum, including a well-attended session on building your union through community coalitions and racial justice. One track of workshops was geared towards new leadership of advocacy chapters and a number of workshops focused on collective bargaining skills. Colleagues had opportunities to explore using the Red Book to improve faculty handbooks, to learn how to analyze university budgets, to hear about strategies for online organizing and much, much more.

Oregonians helped lead a number of sessions, including AAUP-Oregon/PSU-AAUP President José Padín’s now annual workshop on running a great contract campaign by preparing to strike if necessary. Bill Harbaugh, Treasurer of United Academics at UO and AAUP-Oregon paired up with national AAUP’s Mike Mauer to teach people about where to find useful information for bargaining and did another session with United Academics’ Dave Cecil on the economics of economic proposals. Dave Cecil also worked 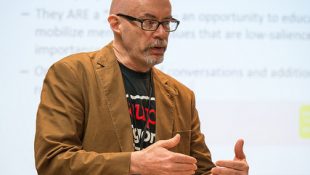 with Mike Mauer to lead a workshop on preparation for bargaining. D Pei Wu, the Executive Director of Portland Jobs with Justice, led four sessions ranging from coalition building to art and creativity in action. Our new Pacific NW Regional organizer, Jim Bakken,  started his AAUP career with leading a great workshop on grassroots leadership and campaign basics.

Summer Institute participants were welcomed with an opening reception at the Portland Art Museum, had the opportunity to socialize together on the Portland Spirit, and gathered again at the end of the Institute to discuss lessons learned from Friedrichs vs California Teachers, the Supreme Court case which could have allowed free riders in all public sector unions.

We also launched our new T-shirts at the Summer Institute! Nancy Eichsteadt designed them and they got g 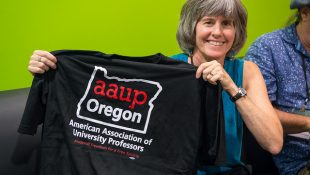 reat reviews.  If you would like one, email Margaret, margaret@aaup-oregon.org.