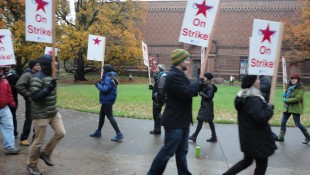 We had hoped that the graduate teaching fellows at University of Oregon would be celebrating a fair contract this weekend. Unfortunately, the university administration continues to refuse to include any form of paid leave in their collective bargaining agreement; this is the key issue that led to the strike. Support the strike, click here to send a message to Interim President Scott Coltrane now. UO administrators have announced that they will grade students themselves, based on their performance up until finals.

The GTFs have also set up a strike fund.  You can donate here.  The union was heartened last week when a UO alum donated $10,000 to the fund.  Every donation will help!

The GTFs have had a successful and rousing picket line and have received support from the faculty and students at UO, as well as from the broader community. United Academics has supported the GTF struggle for months, taking on the administration’s strike breaking plans, providing lunch and support on the lines, and much more.  AAUP members from Portland have come to Eugene to walk the picket line.