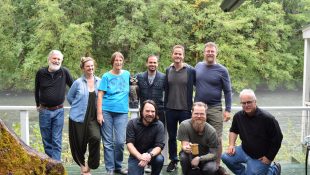 At the University of Oregon, we are learning more about the $500 million gift from Phil and Penny Knight. The vision for a new Campus for Accelerating Scientific Impact builds on key research strengths in the life sciences and holds the promise to enhance collaboration with OHSU and OSU. We think this is a good day for the University of Oregon and higher education in Oregon.

We also recognize that this gift does not address the underlying fiscal weaknesses for universities across Oregon that result from two decades of state disinvestment. For this reason, we still need a long term revenue solution for education in Oregon – and the next generation of students our schools and universities will serve. For this reason, we are all in for Measure 97.

The upcoming election provides us with our best chance to improve the state’s long-term economic situation.  Measure 97 would raise approximately $3 billion a year to bolster education, health care, and senior services in Oregon by instituting a modest tax hike on corporate sales over $25 million. Passage of Measure 97 will free up resources at the state level, preventing state budget cuts to higher education, further cuts to K-12, and gross tuition hikes for our students.

In the meantime, United Academics is hosting a Get Out the Vote event this coming Monday, October 24, 3-4pm at the Crater Lake rooms in the EMU. U.S. House Rep. Peter DeFazio will keynote this event, explaining his bill, the HIGHER ED Act, to make college more affordable for students nationwide. A central focus of the legislation would help borrowers repay their student loans by raising the minimum salary requirement before they have to begin to pay back loans under income-driven repayment plans.

Hope to see you there on Monday!