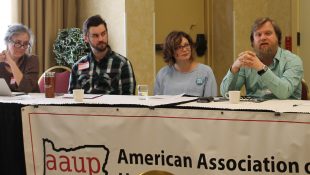 Our first year as a chapter, 2015-16, was a tumultuous one on our campus, but culminated in a Joint Agreement among College of Liberal Arts faculty and the Board of Trustees on Shared Governance, Consultative Decision-Making, and Communication. This year, we have continued to monitor the administration’s fulfilment of the terms of the Joint Agreement, as action items come due. Most significantly, the Board of Trustees has rescinded its resolution of last year that had linked CLA faculty numbers to enrollment figures and fixed the faculty at a 10-to-1 ratio, with no more than 80 percent of faculty to be comprised of tenured, tenure-track, and continuing non-tenure-track positions. Acknowledging that “its role is not to prescribe ratios and hiring parameters for faculty,” the Board has recognized such decisions about allocation of scarce resources belong with the faculty. Moreover, although the Board’s Finance Committee determined budgets will be tightened, Trustees responded to faculty feedback about the budgeting process by agreeing that cuts would not be imposed in a single year, as originally proposed, but instead distributed over two years. In short, we continue to see and to press for improvements in the processes of shared governance, consultative decision-making, and communication.